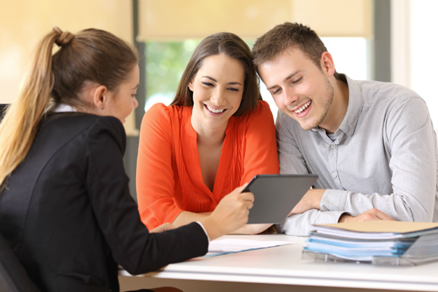 How to know whether now’s the right time to sell

There’s usually a trigger that causes someone to want to sell their home and move, which means you might not have the luxury of choosing the best time of year. For example, you might have a new child and need more space.

But for our customers who don’t need to move straight away, one of the questions we’re often asked is: “when’s the best time of year to sell my house?”

The best time really does depend on what you’re trying to achieve with your move. It could be the certainty of an easy move while the market is fluid or achieving the very best possible price to secure the next dream move.

Ultimately, the best month or season to sell varies from area to area and year to year. The best way to know is to start the conversation with a valuation from your local Darlows branch, but we’ve put together some guidelines below based on our experience in the industry. Spring is traditionally thought of as the season when the housing market awakens after a quiet period in the winter. It’s a hot contender for ‘best time to sell’ and is also a very popular and active time in the market.

Market demand is also higher from buyers during Spring. The number of buyer registrations account for 30% of the yearly total, meaning more people are looking to sell and demand to buy is equally high.

Spring is second only to Autumn in terms of transactions in the UK between 2007 and 2017, according to the land registry house price index. 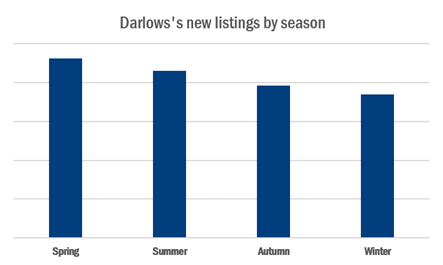 Selling in the Summer

One of the best reasons why summer is a great time to sell is it gives the best chance of a dry moving day!

In Wales, Summer is the time when many sales take place. This is largely down to the listings from Spring receiving interest and a supply of new homes still coming to the market. June is the busiest month of the year for house sales and new home sales in Wales, which indicates that interest remains high.

By the time August comes around, the average sales decrease. This is probably down to holiday lulls and preparing for a new school year, so on average sales in Summer are lower than Spring.

However, new build sales are at a high in the summer months compared to the other seasons, with the improved weather meaning that building projects can progress. Although sales are relatively close between the seasons, there are 6% more new build sales for Wales in the Summer when compared with Winter sales. 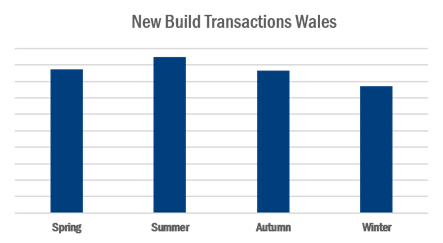 Selling in the Autumn

Autumn remains high for sales in Wales compared to the UK as a whole, when sales begin to slow down after the busy Spring and Summer.

Autumn is a time when a lot of those who listed in the Summer move. It can also be a great time to capture a property’s outdoor features, as the colours are unique, and the weather is often still quite mild.

Demand for new build properties does decrease to more of an extent, with 2.5% lower sales in Autumn then Summer – likely because the days get shorter and building production starts to slow down.

Selling in the Winter

Winter is usually thought of as one of the worst times to sell. This is because transactions are at the lowest and there’s a lull in property coming to the market too.

But it’s not all bad – there are lots of new buyers interested in moving at this time, which means there’s demand but very little competition. In terms of new buyer registrations, Winter is only 5% less active than the Summer months when the market is moving fast. 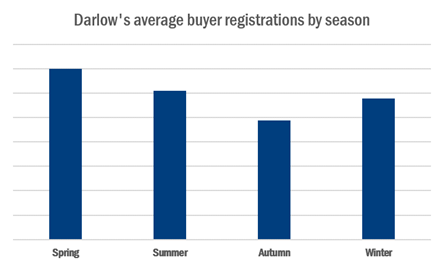 Selling your home in the New Year

After Christmas there’s an explosion of activity in the market. Rightmove traffic in December 2017 was an average of 22.6m per day. Fast forward to January 2018, just one month later and it’s 38.2m per day. That’s a boost of almost 70%, making the new year the time when demand picks up most rapidly.

A lot of agents talk about the Boxing Day spike as the best time to launch to the market. In 2017 Rightmove traffic went from 11.7 million on Christmas Day to 21.9m on Boxing Day (need some room for all the prezzies).

But the most important thing to remember is 50% of views online in the first month of a listing come in the first week. That’s why Boxing Day gets beaten hands down by the 2nd January as the best time to launch a property.

The New Year is a real contender for the best time to sell as the lack of supply and higher demand means that astute newcomers to the market can steal a march and get moved early.

Guide to Selling in the New Year